Flexible buildings for daycare centres and schools, designed to offer an optimal and smart learning environment.

Adapteo is launching their new flexible buildings for schools and daycares in Finland, designed to offer an ideal, smart learning environment. The renowned architect Reino Tapaninen and Raila Oksanen, an expert in pedagogical learning, were hired as advisors in designing the smart school. According to them, flexibility is the future of educational buildings, as it creates the conditions for inclusive schooling where the needs of the individuals are met.

In the spring of 2021, Adapteo began developing buildings for a smart school and daycare in Finland. They saw that the municipalities had a growing need for modular school buildings for both temporary, long-term and permanent use. By working in collaboration with the country’s leading experts in the field, Adapteo is aiming to meet those needs in the best way possible. The architect Joona Heikkilä at the architectural firm Uki Arkkitehdit was ultimately commissioned to design the new flexible buildings. Based on their expertise and solid experience of architecture for pedagogical learning, Reino Tapaninen and Raila Oksanen acted as advisors to Joona Heikkilä throughout the process.

Raila Oksanen and Reino Tapaninen, experts in pedagogy & learning, responsible advisers in the process of designing the smart school.

– I’m thrilled to take part in this project. Adapteo saw that flexible solutions can create a smart school at just the right time, says Reino Tapaninen.

Reino is a private consultant with a focus on school buildings and educational environments. Previously, he was the chief architect at the Finnish National Agency for Education (EDUFI) for 25 years, where he was responsible for the development of guidelines for the form and construction of schools. Raila Oksanen is both a primary school teacher and Doctor of Education, and has studied the educational environment in different parts of Finland.

– Society has developed a great deal in the last 25 years. The buildings in which the teaching takes place need to be adapted accordingly. The static buildings with classrooms of 60 square meters wall to wall along a corridor no longer work, says Raila Oksanen.

Why do the traditional school environments with equally large classrooms no longer serve their purpose?

– They don’t consider the individual needs of the students, which we know more about now. In addition, the environment doesn’t stimulate community and inclusion, but can instead reinforce differences and groupings. School should be for everyone, and a place where students can connect, says Raila Oksanen.

– In a smart school, teachers can vary the size of the rooms according to the educational needs and the needs of students. Two groups of children should be able to sing in a large, open space. That same space should then be possible to convert into a smaller room where the students are able to concentrate when it’s time to study mathematics. In addition, students with learning difficulties may need smaller rooms to be able to better engage in the education, says Raila Oksanen. 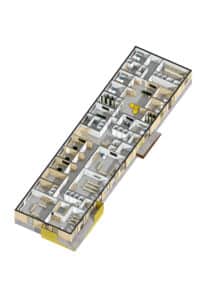 Is flexibility also needed for daycares?

– Absolutely. Large open spaces are suitable for when the children are being active, such as playing or dancing. It’s important for the younger kids to be able to rest, which they do best in smaller, closed rooms. Smaller spaces are also preferable if they are learning how to read, looking at pictures, or practicing their ability to concentrate in other ways, says Raila Oksanen.

What societal changes have taken place in the last 25 years that have increased the need for flexibility in environments for child care and education?

– We see an increased polarization in several areas. A few decades ago, nearly all children in Finland spoke Finnish, while several children today have another mother tongue. The socio-economic differences have also increased. In addition, we now have a better understanding of how children’s learning opportunities differ. It’s important that the environment of the school doesn’t reinforce the polarization, but instead contributes to integration and inclusion. Flexible solutions make that possible, says Raila.

– We also see changes in population development that apply to how we build daycares and schools. In smaller municipalities, say for example in northern and eastern Finland, the population is aging and the number of children is decreasing, while the Helsinki area is growing. Since we don’t know how these changes will develop, it’s foolish to build too many static permanent buildings that are not flexible in regard to size and location. Adaptable buildings can move with the needs, he says.

Are the buildings designed for Adapteo sustainable?

– Yes. They’re made of wood, they’re scalable and can move to new places when the needs change. It’s more resource-efficient than building static buildings, which remain empty in places where the need for them has disappeared, and then need to be built up again in each new place the demand appears, says Reino Tapaninen. 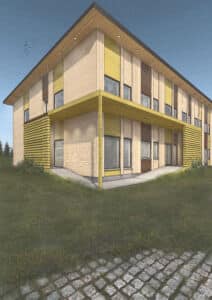 Are there any misconceptions about adaptable buildings among the general public?

– Yes, maybe among some people. There has been enormous progress in the development of adaptable buildings in recent years. If you don’t know about that, you might think that the flexible buildings of today are reminiscent of the barracks of the past. They were ugly, built of dull looking material, and were not adapted for any special needs. But now the design is more attractive, the construction is better, and the material is kinder to both nature and humans, says Raila Oksanen.

Finland is known for its high-quality education. Is Adapteo’s new smart school building on that tradition?

– Yes. Since flexibility allows for greater variation, many children and students have better pedagogical prerequisites which results in greater opportunities to absorb the material being taught. Due to the shutdown during the corona pandemic, the progress within education back-tracked. But I think we’ve started moving forward now. The flexible solutions are important for the development to go in the right direction again, Raila Oksanen concludes.

About Adapteo’s smart school and daycare:

We process personal data and use cookies on our website in accordance with ours. Some cookies are necessary to make the site accessible to you, but others serve to improve your user experience and are accepted voluntarily. Select below whether you agree that we process cookie data in order to enable and analyze the delivery of third-party features (eg social media plugins) and to improve your user experience by analyzing your use of the website. You can withdraw your consent at any time.

I agree to the settings made above. Change these settings at any time via Your cookies at the bottom of the website.
Save the above choicesAccept all
Your cookies